Holidays aside, the month of December was an exciting (and busy) month at Prosio Communications as we launched the California Office of Traffic Safety’s designated sober driver app, DDVIP, and promoted the kickoff of the annual statewide December DUI Crackdown.

After months of planning, we promoted the launch of the app in Los Angeles at the KIIS FM Jingle Ball concert and at KKDO’s Electric Christmas in Sacramento. That’s right: We got to rock out to Taylor Swift, Ed Sheeran and Bush, while promoting safe and sober driving to attendees. Can you say, dream job? Leading up to the concert events, we worked with our radio partners to give one lucky person who downloaded the app the opportunity to win seats in the DDVIP Suite, among other perks such as spending money for dinner before the show and concert souvenirs. Both events brought in a combined 3,000 app downloads between radio promotions, street teams and social media, and proved to be a tremendous success.

If all of the hype around the app has sparked your interest, check out these exciting facts: The new DDVIP App rewards sober drivers with perks such as free appetizers and non-alcoholic specialty drinks (called “DDrinks”) from more than 250 partnering bars and restaurants throughout the state. And, if one of the normal DDs wants a night off from playing the sober chauffer, the app allows them to easily locate a ride home via Uber, Lyft or Curb. I know you will be heading straight to your Apple and Android app store to download it, once you’ve finished reading this blog –we don’t blame you!

Merely two days after the last concert engagement, we partnered with the California Highway Patrol and held a press conference to further promote the DDVIP App, as well as the beginning of California’s annual DUI Crackdown. This event took place at Midtown Sacramento’s LowBrau Bierhall, which just so happens to be one of our DDVIP Partners. This event featured key speakers from OTS, CHP, the California District Attorneys Association and RADD (Entertainment Industry’s Voice for Road Safety). LowBrau’s DDrink, the “No-Jito,” was served to those in attendance, including media and members of law enforcement. We are also grateful that despite the local flash floods caused by the ‘storm of the century’ that hit Northern California the day before the event, several local media outlets, including CBS 13 and The Sacramento Bee, were still able to attend and continue the buzz around this innovative new app.

Make sure to stay tuned for all that is to come in 2015, since it’s undoubtedly going to be a great year. Okay—you can now go to your app store to download DDVIP. Enjoy! 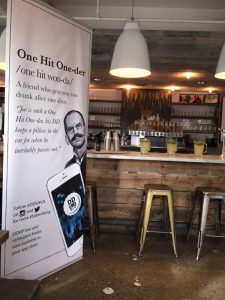 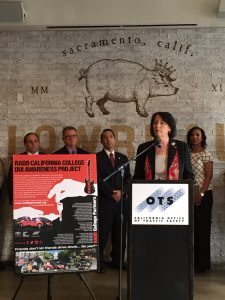 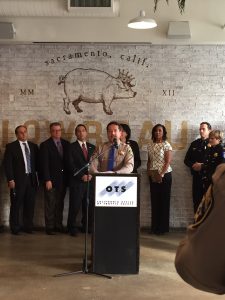