The team had fun recalling some of their favorite costumes of Halloweens past. Relive the fun (and embarrassment) with us!

“My favorite costume that I’ve ever worn would have to be the year I was Cinderella–but not just any Cinderella. I was dead Cinderella and Matt was dead Prince Charming. Although it wasn’t very pretty, we sure liked the spooky spin we put on things!” –  Jennie

“I’m sure there are pictures of this costume somewhere, but when I was in kindergarten, I was obsessed with Power Rangers. I went as the Pink Ranger and can recall wearing it on more occasions than I’d like to admit. It had a belt that played the power rangers theme song when you pressed the belt buckle…it was awesome.”   – Lindsey

“It’s more like my most embarrassing costume than my favorite costume…When I was in Kindergarten and we had our classroom Halloween party, my mom thought she was supposed to send me to school in full costume. It turns out costumes weren’t required so I remember being dressed like a Smurf from head-to-toe (blue face paint included) and having to survive an entire embarrassing day at school as the only kid that actually dressed up.” – Alma

“Darn it. I had a picture from an office I worked in and we all did 1950s [themed costumes]. I was the nerd. Glass with tape on it…ugly pants riding high…greasy hair and pocket protector. Then there was the time I was a drag team repair man–but that’s a whole other story!” – Chris 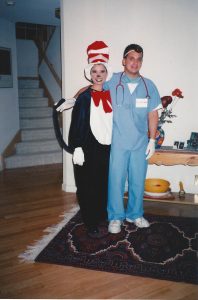 Lori and her husband Mike in Dr. Seuss couples costumes–Lori went as the Cat in the Hat and Mike went as the doctor himself!

“Probably my favorite is going as a roller derby team with a group of girlfriends…we went on a pub crawl and all of us wore roller skates (for reals). We all even had our names…I was ‘ChupaKARIbra.’” – Kari 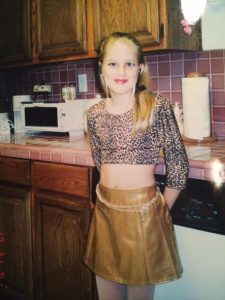 “I may or may not have had a slight obsession with Britney Spears back in my younger years. Hence, my favorite Halloween costume to-date. With my headset microphone, leopard top and pleather skirt, I had fully convinced myself that I was the ‘next big thing.’” – Linsey 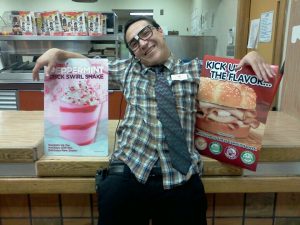 “I like to dress up like a nerd on Halloween because I can just use my already nerdy attire to make it an easy and fun costume. (And, yes, this is me working the drive thru at Arby’s on Halloween night my sophomore year of college. Fun.)” – Ronald